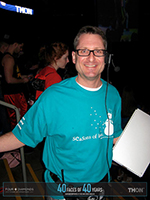 Connection to Four Diamonds: I’ve been working at Penn State since 1994 and attended my first THON in the White Building in 1995!  Yes…I’m old.  I’ve probably attended almost every THON since I worked at Penn State…except for two?

Years of Involvement: My most direct involvement in THON was from August 2007 through April 2013, when I served as THON’s advisor.

How are/were you involved with Four Diamonds and THON?
I currently supervise the Office of Student Activities, where the current and future THON advisor will be housed. I was involved in Four Diamonds when I served as the advisor through attendance at Advisory Board meetings and functions and through regular collaboration with the Four Diamonds staff.

Why is the partnership between Four Diamonds and THON important?
As advisor, I was often asked by advisors of other Dance Marathons why Penn State’s THON was so successful. My response was always the same – because of the relationship with Four Diamonds. The relationship allows for THON to gain invaluable support from the University. More importantly, the relationship allows Penn State students to have direct contact with families, children and the hospital, through which they gain personal insights into childhood cancer, its impact on families/patients and its treatment. These engender an ethic of service and philanthropy that hopefully translate into their lives after graduation.

What is your favorite memory?
My favorite memory is my very first Four Diamonds family picnic. This no longer occurs, but it was an event held every September at a park in Hershey. The event felt like a huge family reunion. A lot of families, Four Diamonds medical and administrative staff and Overall Committee/Executive Committee members attended. To me, it demonstrated that everyone involved with THON and Four Diamonds is critical in the fight against pediatric cancer – it really does take a village.

What is your dream for Four Diamonds and THON over the next 40 years?
I know that the standard mantra within THON is that all efforts are about the kids. For me, that isn’t necessarily the case. As an educator and former advisor, my primary concern was always about the experiences that students have. My dream is that students will continue to have the kinds of transformational experiences that they have had for the past 40 years. They get to develop relationships with kids and families, they get to raise money, they get to be a part of a group of peers that is dedicated to something bigger than themselves or their organizations, they develop resilience and empathy, and that they experience some of the magic that THON offers.