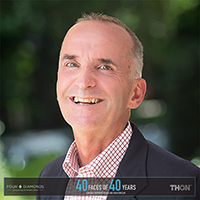 Connection to Four Diamonds: Served as advisor to the THON Overall Committee

How are/were you involved with Four Diamonds and THON?
I would take the overall chair to the Four Diamond Board meetings four times a year and served as the advisor to the THON Overall Committee. I worked with the liaison to the overall committee (something that started in the late 80s).

During my time at PSU, I saw families and groups develop bonds and friendships that went beyond the Dance Marathon weekend. Sigma Pi and Kappa Alpha Theta is a perfect example of that. The Minnaughs were paired with them after Aubrey was diagnosed, so they watched her grow up – first holy communion, getting her prosthetic leg and other events that were important to her and her family. I remember stopping by there one time on my way to the shore and some of the members of both groups were outside in the pool playing. I know that they still keep in touch with some of the groups nearly 20 years later. Not all of the stories were like that – there were times when the Four Diamond child lost their battle and members of the group were there to comfort the family.  There are few other philanthropies across the country where you see the connection between the college students and the groups that benefit from their efforts.

What is your favorite memory?
It’s tough to just share one favorite memory but some include: setting up the White Building in less than 24 hours, taking the Overall Committee to the Four Diamonds picnic in the fall and not letting them out of the van until they had come up with a theme, being the first alumni couple (officially) to dance and raising $15,000, working with the first female chair or having a scholarship endowed in my honor. But if I really had to pick one favorite memory, I would have to say that it was being behind the stage at THON in 1992 with the Nittany Lion since we needed one more person to hold up a number since we raised $1 million for the first time. The split-second gasp and then the roar when John Ferenchak announced the total…I still get goosebumps whenever I think back to that day. It has to be the highlight of my Penn State experience.

What is your dream for Four Diamonds and THON over the next 40 years?
I hope that Dance Marathon continues to be a type of event that draws the campus together. As the University grows, there are few events that bring as many students together for a common cause. Something that I read recently mentioned that nearly 20,000 students do something to help put Dance Marathon together. I also hope that one of these years there is no need for Four Diamonds or any type of organization that needs to help children and their families battling cancer.