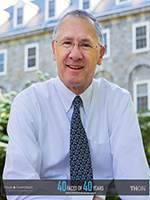 Connection to Four Diamonds: Served as an administrative advisor to THON 2008-2016 and was Penn State’s chief fundraiser from 1996-2016.

How are/were you involved with Four Diamonds and THON?
I was one of several administrative advisors to THON from 2008-2016.

Why is the partnership between Four Diamonds and THON important? THON, as a student-led program, is often the first philanthropic experience that many of our students have in their lives. It demonstrates the joy, reward, sacrifice, hope, selflessness, commitment, humility and love involved when we help others in this world who are less fortunate than ourselves. Much of the good work done at the Penn State Health Milton S. Hershey Medical Center through Four Diamonds is enabled by our students who experience philanthropy in a very personal and meaningful way.

What is your favorite memory?
My most lasting memory advising THON came during one of its more challenging years in 2011-2012 when both the University and THON faced great crises. Clearly, the brightest and most hopeful moment during that entire dark year was when THON announced its total, a sum many never thought possible, which symbolized to those within and beyond the Penn State family the true values of our University.

What is your dream for Four Diamonds and THON over the next 40 years?
Of course, we all hope that the dream of curing cancer will happen sometime over the next 40 years.  But in the short term, I hope to see the continuing expansion of THON and of Mini-THON, spreading its mission and engaging others more deeply across the entire country.