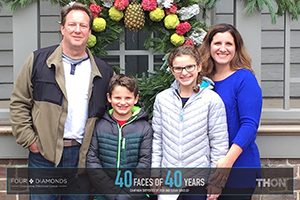 How are/were you involved with Four Diamonds and THON?
During my tenure as the Four Diamonds Director, I helped THON, developed donor relations, worked with the hospital staff and collaborated with the Four DiamondsAdvisory Board. That was an exciting time at Penn State Hershey since we were in the midst of the fundraising campaign for the Children’s Hospital.

My involvement now has come full circle in that my children are now participating in Mini-THONs at their elementary school!

What is your favorite memory?
I think after working for Four Diamonds that it is impossible to name a favorite memory. It’s so many memories all rolled into one that made working for Four Diamonds so special. I’ve treasured the relationships that I developed with Four Diamonds families and have learned that life is all about perspective. If I had to bottle up one memory, though, I would say that it is the energy, love and compassion that is felt during the last four hours of THON. There is no greater example of human kindness than what is felt during those last four hours.

What is your dream for Four Diamonds and THON over the next 40 years?
My dream is that all types of pediatric cancer are curable.